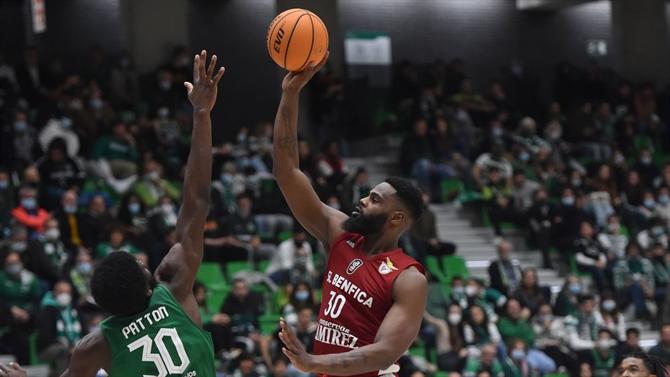 On March 23, in a match of the 16th round of the regular phase, Benfica beat Sporting, at the Pavilhão João Rocha, by 89-73. This Sunday afternoon, still in Alvalade, and at the start of the second phase of the national basketball championship, the eagles beat the lions again, this time by 90-76. With this triumph, the team led by Norberto Alves consolidates its leadership in the competition.

After a balanced first period, Benfica accelerated in the second quarter and reached the break with a 10-point lead (41-31). Sporting reacted again in the following period, entering the final straight only 5 points behind, but the reds gave no chance in the last quarter and went for a victory which ended up having expressive numbers.

João Betinho Gomes, with 27 points, was the match’s top scorer, and on the Lions side, the individual highlight fell to Micah Downs, with 21 points.

In the second round of this second phase, Sporting travels to Oliveira de Azeméis to face Oliveirense (Saturday, at 9:00 p.m.), while Benfica receives FC Porto, in Luz (Sunday, at 5:00 p.m.).

At the final whistle, Aaron Broussard gets two more points and puts the result in 76-90.

Triple by João Betinho Gomes and Benfica is very close to winning the game. 76-86.

Fifth foul by Ivan Almeida and consequent exclusion of the Benfica winger.

Tanner Omlid failed in the leonine attack and on the other side Wendell Lewis from the free throw line converted both attempts. 75-83 just over 1 minute from the end. Very complicated accounts for Sporting …

On the rebound, possession of the ball returned to Benfica and João Betinho Gomes managed to convert a triple throw. 75-81.

Wendell Lewis from the free throw line converts the first and misses the second. 75-78.

Another setback for the lions: António Monteiro’s fifth foul and subsequent exclusion from the match. 2 minutes and 20 seconds to go.

Aaron Broussard, from the free throw line, misses the first and converts the second. 73-75.

Low weight for Sporting: Shakir Smith, who was one of the great figures of the Leonine recovery, commits the fifth fault and is excluded from the match.

Sporting do not throw in the towel and continue to try to move forward. For now, it’s leaning against Benfica. 73-74 three minutes from the end.

Everything open for the last four minutes. 68-72.

Micah Downs scores twice and is fouled. From the free throw line, the leonine winger does not tremble and confirms the game at three points. 65-70.

Benfica responded with a hat-trick from José Barbosa. 62-70.

Shakir Smith, after a successful penetration, converts from two and is still fouled. The American also scores from the free-throw line and reduces to 62-67.

Triple on one side… triple on the other. António Monteiro for the lions, João Betinho Gomes for the eagles. With about 8 minutes to go, 57-65.

Start of the fourth and final period!

Tremendous triple from António Monteiro at the top of the horn. 54-59.

Excellent response from the lions, who closed in on the marker. 51-54.

Benfica are strong in the internal game, while Sporting maintain their bet on outside shots. Micah Downs already has 5 converts in 6 attempts. 45-53.

Sporting once again demonstrate their success in outside throws, with Shakir Smith and (again) Micha Downs reducing the disadvantage. 42-49.

After a two-point strike from Ivan Almeida, Sporting responded with a hat-trick from Micah Downs. 34-43.

Beginning of the second part!

After a very balanced first period, where the eagles won by two (20-18), the start of the second quarter seemed to bring a dominating Sporting, since the lions made a partial of 7-0 and passed before. The problem arose then, as Luís Magalhães’ men made too many consecutive errors, both in defense and in attack – more than five minutes without scoring – allowing Benfica to reverse the course of events and resume the head of the bulletin board. They are, for the moment, 10 points higher for Norberto Alves’ team, but, as we know, in basketball this gap is perfectly reversible. Everything is therefore open in this derby between the eternal rivals…

Sporting are back in the points, thanks to a hat-trick from Diogo Ventura. 28-38.

Leo’s bad moment continues – he hasn’t scored for more than five minutes. They take advantage of the Eagles who have already obtained the biggest advantage of the whole meeting (13 points). Just over a minute from the end Sporting 25 Benfica 38.

As expected after a 0-9 partial defeat, Luís Magalhães, Sporting’s coach, requests a time out.

The eagles continue in an upward curve and, this time, it is a hat-trick from Frank Gaines which confirms the to return to of Benfica at the game. 25-29.

A partial 6-0 allows Benfica to regain the leadership of the match. 25-26.

Aaron Broussard breaks the bad period of the eagles and converts from two. 25-22.

In the first three minutes of the second quarter, Benfica have already committed four turnovers and remain without points. Sporting, on the other hand, have greatly increased their defensive and offensive indices and are already five points clear. 25-20.

Unhappy with the performance of his players at the start of the second period (Benfica has still not scored), Norberto Alves, the Reds coach, asks for a time out.

Another loss of the ball from Benfica in attack and Tanner Omlid, on the counter-attack, sinks again. 23-20.

Tanner Omlid, with a spectacular dunk, puts Sporting back in the lead. 21-20.

The scoreboard is open in the second quarter: João Fernandes, from the free-throw line, missed the first and made the second. 19-20.

Benfica again made a turnover at the start of the second period, but in response, Miguel Maria, from three, could not put Sporting in front of the marker.

Triple also for Miguel Maria, in the last attack of the first period. 18-20.

Both teams had a few offensive failures in the final moments. About two and a half minutes before the end of the first period, Sporting 11 Benfica 15.

Benfica take advantage of their best phase of this first period to reach a lead of 6 points. 9-15.

Before the start of the match, there was a minute’s silence in memory of the late Rui Pinheiro, who died on Sunday, and who was a Sporting basketball player between 1974 and 1982, during which time he won four national championships, four Portuguese Cups and three Lisbon Championships.

There are already teams!

It is a reunion between lions and eagles, since the two sets measured their forces very recently, on March 23. That day took place the aforementioned victory of Benfica (89-73), in a match of the 16th round of the regular phase, played at the Pavilhão João Rocha, in Alvalade. It was, we can say, the end of the malapata of the reds against the eternal rival, since the green and white emblem had won the last 10 (!) games. Note, out of curiosity, that before this overwhelming series of Sporting derbies, Benfica had won the last duel on November 2, 2019.

In the regular phase, as we recall, Benfica managed to secure 1st place, with 41 points, as many as Sporting, who occupied 2nd place, but with the Reds enjoying the advantage in the direct confrontation (defeat by 63-74 in the first round, in Luz, and victory by 89-73 in the second round, in Alvalade). FC Porto finished in 3rd place, with 39 points, while Oliveirense was in 4th place, with 35 points.

Lions and eagles are in group A of this 2nd phase, alongside FC Porto and UD Oliveirense, teams which will also face each other this afternoon (5 p.m.), at the Dragão Arena, in Porto.

The João Rocha pavilion, in Lisbon, hosts this Sunday (3 p.m.), another great Portuguese basketball derby. Sporting and Benfica face each other at the start of the second phase of the national championship. BOLA Online will track all incidents in the match. Don’t miss…