Ricardinho, who has already retired from the national futsal team – announced his farewell last November – will even have one last match, a real farewell match, scheduled in Gondomar, his native country.

The player was then challenged by FPF president Fernando Gomes to re-enter the pitch. “May you allow us to make your last international appearance on Portuguese soil, in a full pavilion. I know you are leaving our pitch today, but we know you will never leave the Portugal national team,” he said, with Ricardinho also agreeing to be the futsal team’s ambassador.

The former captain will make his last selection on April 7, at Multiusos de Gondomar, in the first of two warm-up matches between Portugal and Belgium, completing a training period until the match of the 7th. 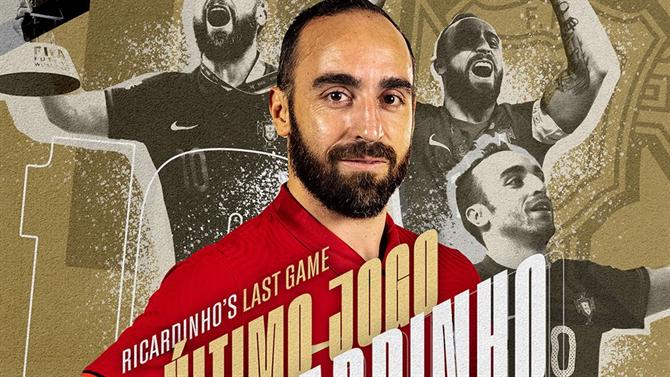 The match will start at 9:30 p.m. with free entry, but with the need to collect a ticket.

“I will be back in the national team, with the Quinas shirt, and I will hear again the anthem that sent shivers down my spine and made me cry last time. After more than 40 titles won, I was still missing one. President Fernando Gomes and our FPF will get this last title: saying goodbye on Portuguese soil. It will be a special day, I will be able to say goodbye to where it all started, where I played the first European Championship, at home and with my family. Above all, with the great desire that I have always had: to go on the field with my children in a match for the national team. I am counting on you,” he told Federation media.

In the service of Portugal, Ricardinho played five European and four world championships, after winning Euro-2018 and the World Cup-2021.

Jorge Braz, announced the group for the preparation matches against Belgium, scheduled for April 7 and 9.

In these matches that serve to prepare the qualification for the next World Cup, the absolute debut of Nuno Miranda (Portimonense) and the calls of Gonçalo Sobral (Quinta dos Lombos) and Hugo Neves (Eléctrico FC) stand out.