The FLEX rover is the new interplanetary vehicle from the startup Venturi Astrolab, created to transport goods and even people across the surface of the Moon — and maybe even on Mars, in the future. The company unveiled the rover on Thursday and hopes to build a full fleet of vehicles over the next 10 years to help Nasa and commercial companies to establish a long-term presence on the Moon.

The name FLEX is actually the abbreviation of “Flexible Logistics and Exploration”, an expression that describes the operation of the vehicle: it was designed to be able to crouch and lift loads on the lunar surface, take them under the belly” then leave them in the desired place. Additionally, the FLEX has been engineered with a modular design, which allows modifications, and is semi-autonomous, and can be controlled remotely.

Astrolab’s idea is to use FLEX to capitalize on new efforts around the world to send new humans to the Moon, such as the dedication NASA has put into Artemis program, which will take the first woman and the first black person to the surface of our natural satellite. “Companies like SpaceX and Blue Origin are solving the problem of long-distance transportation, and we want to solve the problem of local transportation — and setting the standard for lunar logistics,” said Jaret Matthews, CEO of the company.

Astrolab has now built a full-scale prototype of the FLEX, which has been tested in a California desert to collect and deliver payloads, as well as configure a vertical solar array. Chris Hadfield, former astronaut and a member of the company’s board of directors, took a tour of the rover and shared his thoughts on the project. In the future, the company hopes that FLEX can be used to carry as many payloads as possible.

Future uses of the rover

The FLEX is designed to carry up to 1,500 kg of loads, positioned above or below its main frame, with an emphasis on flexibility. “We’re working on FLEX to make it the most versatile rover ever, and the key innovation is the fact that we have this modular payload capability,” Matthews explained. According to him, Astrolab worked on the vehicle with NASA’s Lunar Terrain Vehicle (LTV) project in mind.

Last year, the space agency issued two requests for industry information on vehicle requirements. Jacob Bleacher, chief exploration scientist at NASA Headquarters, told the Lunar and Planetary Science Conference that he expected NASA to issue a call for proposals for an LTV within the next few months. next few months – and that’s where FLEX comes in. 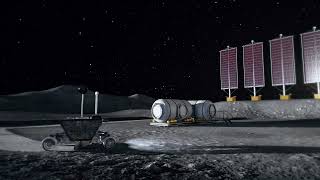 With the competition in mind, the company has worked on the vehicle to ensure it meets the requirements demanded by NASA, such as the ability to operate during an eight-hour moon walk, work on the lunar south pole even at night and have been working for over 10 years. So far, Matthew has been optimistic about the progress of the project. According to him, this is largely due to the rapid and objective development adopted by the company, of “design, build, break, repeat”.

Once ready, the rover should be compatible with launches from different types of rockets and landers, and Matthew thinks it’s possible the FLEX could be taken to the moon even before a manned landing. of the Artemis 3 mission, which should not take place before 2026. “I would love for FLEX to be the first astronaut-piloted rover since it was apollohe suggested. “We are going as fast as possible and I think we will be ready at the first opportunity.”

Source: The edge; Via: SpaceNews